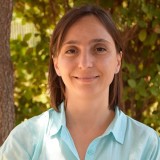 During 2010-2012  she was working in LNBD group as a researcher investigating gold NPs synthesis techniques as a building material for VOC sensors developed in our group. In 2015 she returned to LNBD as a researcher to continue our research on the VOC sensors.